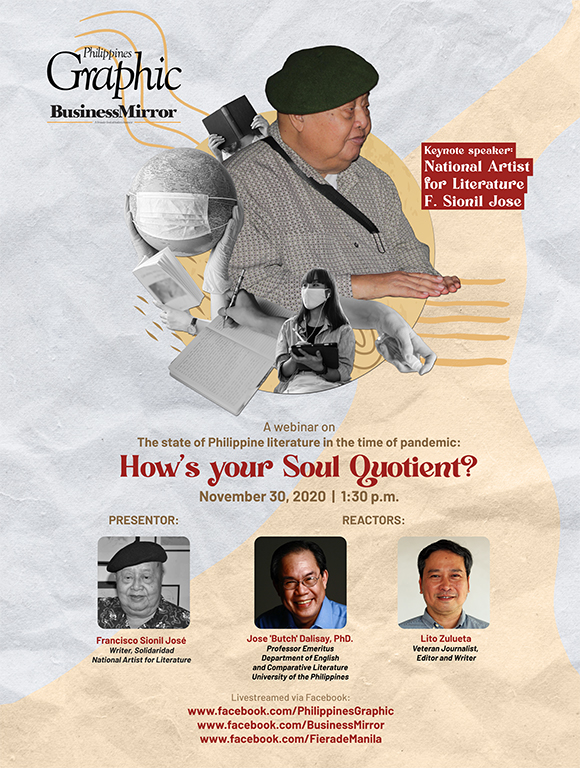 It’s been more than half a year since the COVID-19 pandemic hit the country and the world in earnest.

Through the various lockdowns, when we were forced to settle in our homes, avoiding physical contact and the spread of the virus, we settled in our little corners watching television or reading from books or the Internet.

Our food for the soul—poems, short stories, novels, essays, and plays—posed as a source of comfort in this time of great stress.

But the bad news is: the COVID-19 pandemic has directly affected the work of literary writers everywhere. Publishers deferred release date of new books, bookstores closed, as with cultural theaters that promote literary output. Even award-giving bodies have postponed their awarding ceremonies for next year.

With full understanding of the importance of literature in promoting art and culture in the country—through literary exposure and education—the Philippines Graphic is holding a webinar on “The state of Philippine literature in the time of the pandemic: How’s your soul quotient?” on November 30 at 1:30 p.m. PST via Zoom live stream thru Facebook and YouTube.

In time for the HOLIDAY celebration of country’s hero Andres Bonifacio, the two-hour webinar will have for its special guest, National Artist for Literature Frank Sionil Jose.

It will cover the following topics:

1. The literary scene in the Philippines since the COVID-19 pandemic;
2. Book publishing and the difficulty of publishing fiction and poetry;
3. Cultural Foundations and their efforts to sustain Philippine literature; and
4. Efforts of individuals, LGUs, schools, and educational institutions to promote literature, the arts, and culture in the time of the pandemic 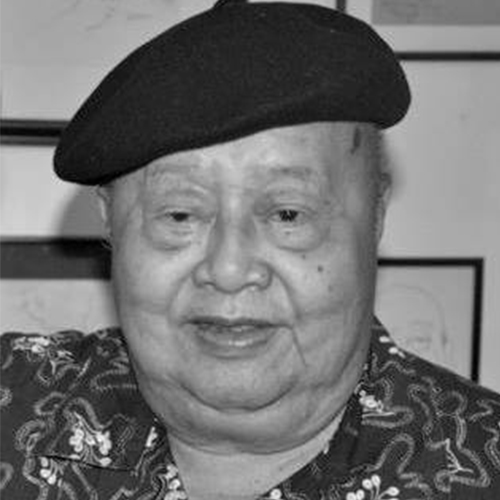 Francisco Sionil José is one of the most widely read Filipino writers in the English language.

He is best known for his epic work, The Rosales Saga – 5 novels encompassing a hundred years of Philippine history, painting a vivid documentary of Filipino life.

Since starting his writing career in 1949, José has written more than 35 books, translated into more than 20 languages and published worldwide.

He has also been involved with international cultural organizations, notably International P.E.N., the world association of poets, playwrights, essayists and novelists, whose Philippine Center, founded in 1958.

José has worked as a journalist, and has founded a bookshop, publishing house and art gallery.

According to Professor Edwin Thumboo of the National University of Singapore, ‘Ever the visionary, Frankie saw Southeast Asia as a region well ahead of the politicians, political scientists and economists. Solidarity did more to advance the understanding of Southeast Asia and the sense of it as a region, than any other journal.”

Recognitions of José’s literary works and his influence on the Philippines and Asia include the Ramon Magsaysay Award for Journalism, Literature and Creative Arts -1980, Philippine National Artist – 2001, and the Pablo Neruda Centennial Award – 2004, and Officer in the French Order of Arts and Letters – 2014.

Now in his nineties, he continues to be a prolific writer and relentless voice against social injustice and national amnesia. Almost daily, he still climbs the three flights of steps to his writing alcove at the Solidaridad Bookshop in Manila. 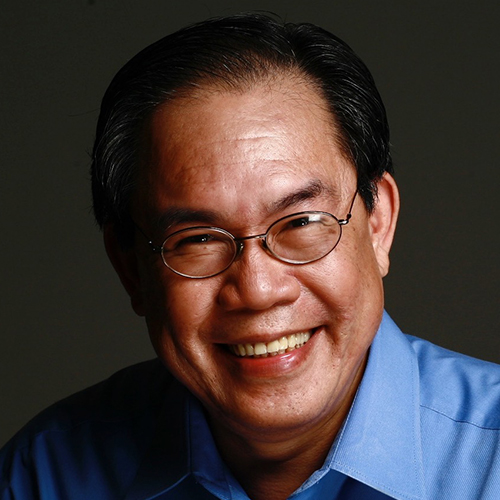 Dr. Jose ‘Butch’ Dalisay Jr. to readers of his ‘Penman’ column in the Philippine STAR’ …

He is currently at work on an oral history of the early years of martial law in the Philippines.

He has published over 40 books of his stories, plays, and essays, with six of those books receiving the National Book Award from the Manila Critics Circle. More than 20 of his screenplays have been produced.

In 1998, he was named to the Cultural Center of the Philippines (CCP) Centennial Honors List as one of the 100 most accomplished Filipino artists of the past century.

He taught English and Creative Writing as a Full Professor at the University of the Philippines. After serving as Chairman of the English Department, he assumed the post of Vice President for Public Affairs of the UP System from 2003 to 2005.

He was appointed Professor Emeritus shortly after his retirement in 2019. The Jose Y. Dalisay Jr. Professorial Chair in Creative Writing was endowed in his honor.

He served as Director of the UP Institute of Creative Writing for three terms from 2008 to 2017.

Among his literary distinctions, he has won 16 Carlos Palanca Awards in five genres (entering the Palanca Hall of Fame in 2000), five Cultural Center of the Philippines awards for playwriting, and Famas, Urian, Star and Catholic Film awards and citations for his screenplays.

He was named one of The Outstanding Young Men (TOYM) of 1993 for his creative writing by the Philippine Jaycees.

In 2005, he was given the Premio Cervara di Roma in Italy for his literary achievements.

In 2007, his second novel, Soledad’s Sister, was shortlisted for the inaugural Man Asian Literary Prize in Hong Kong; it has since been published in Italian, Spanish, and French editions.

In 2011, the Arizona-based Schaffner Press published his two novels under the title In Flight: Two Novels of the Philippines; the book has won a Silver Nautilus Prize in the US in the multicultural/indigenous category. In 2012, Quezon City gave him a Parangal award as one of the city’s most outstanding citizens.

He has been a Hawthornden Castle, British Council, David TK Wong, Rockefeller, and Civitella Ranieri fellow, and has held the Henry Lee Irwin Professorial Chair at the Ateneo and the Jose Joya, Jorge Bocobo, and Elpidio Quirino professorial chairs at UP. As a writer, he has represented the Philippines in literary festivals and conferences in the US, UK, Canada, Australia, Italy, Singapore, Malaysia, and China, among others.

Lito is a veteran journalist, editor and writer, a film and literary critic.

He was Arts & Culture editor of the Philippine Daily Inquirer. He continues to write reviews, features, and commentary on the arts, cultural heritage, and the Church. In 2008, he won the National Book Award in History.

He is a faculty member of the University of Santo Tomas, where he teaches journalism, literature, and cinema.

Upskill your Team’s knowledge and capabilities to meet
the New Normal. Call us for details.